Suitable only for adults

No-one younger than 18 may see an ‘18’ film in a cinema.
No-one younger than 18 may rent or buy an ‘18’ rated video.
In line with the consistent findings of the BBFC’s public consultations and The Human Rights Act 1998, at ‘18’ the BBFC’s guideline concerns will not normally override the principle that adults should be free to choose their own entertainment. Exceptions are most likely in the following areas:
In the case of video works (including video games), which may be more accessible to younger viewers, intervention may be more frequent than for cinema films.

Where sex material genuinely seeks to inform and educate in matters such as human sexuality, safer sex and health, explicit images of sexual activity may be permitted.

Sex works are works whose primary purpose is sexual arousal or stimulation. Sex works containing only material which may be simulated are generally passed ‘18’. Sex works containing clear images of real sex, strong fetish material, sexually explicit animated images, or other very strong sexual images will be confined to the ‘R18’ category. Material which is unacceptable in a sex work at ‘R18’ is also unacceptable in a sex work at ‘18’.

Suitable only for 15 years and over

The work as a whole must not endorse discriminatory language or behaviour.

Drug taking may be shown but the film as a whole must not promote or encourage drug misuse. The misuse of easily accessible and highly dangerous substances (for example, aerosols or solvents) is unlikely to be acceptable.

Strong threat and menace are permitted unless sadistic or sexualised.

Dangerous behaviour (for example, hanging, suicide and self-harming) should not dwell on detail which could be copied. Easily accessible weapons should not be glamorised.

Nudity may be allowed in a sexual context but without strong detail. There are no constraints on nudity in a non-sexual or educational context.

No theme is prohibited, provided the treatment is appropriate for 15 year olds.

Email ThisBlogThis!Share to TwitterShare to FacebookShare to Pinterest
Labels: Josh

Silence of the Lambs and No Country for Old Men are considered the two best thrillers in recent memory... and they're rated R. Their target audience was probably for the young male adults.

Meanwhile, there are those thrillers that are borderline horror films, such as M. Night Shyamalan films The Sixth Sense, Signs, The Village. Since they're close to horror (and horror films target teenage girls), the demographic would be slightly different... probably younger and more female based.

And then there are legal thrillers (Fracture, Runaway Jury) and crime thrillers (Memento, Se7en) that target a more mature audience... and classic thrillers (any Alfred Hitchcock film) that are rated PG, but are intended for adults.


But if you just need a target audience for a generic thriller film... I'd have to say the young adult demographic from 18-25.
Posted by Long Road Thriller 2011 at 03:02 No comments:

Email ThisBlogThis!Share to TwitterShare to FacebookShare to Pinterest
Labels: Josh

We are happy with the way the final product turned out. Some of the different shots used we feel worked well for the genre - especially the ones concerning the light. We also liked the graphics used alongside the titles that was added in the editing process. We were also happy with the location we managed to acquire.

After getting feedback, we decided that the sound was very repetitive. To break it up a bit, the beginning was made slower with more of a build up. The title sequence was made a lot shorter in general as well so i could cut parts of the music out. I also sharpened up the middle part of the music to try to remove any errors.

http://www.mp3upload.ca/track/media-studies/song-media
Posted by Long Road Thriller 2011 at 08:20 No comments:

Email ThisBlogThis!Share to TwitterShare to FacebookShare to Pinterest
Labels: James 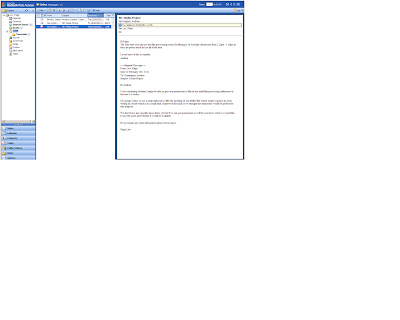 Screen Caps of the emails sent by me to Andrea (head of photography) to obtain a darkroom as our filming location. (2)
Posted by Long Road Thriller 2011 at 08:20 No comments:

Email ThisBlogThis!Share to TwitterShare to FacebookShare to Pinterest
Labels: Paige 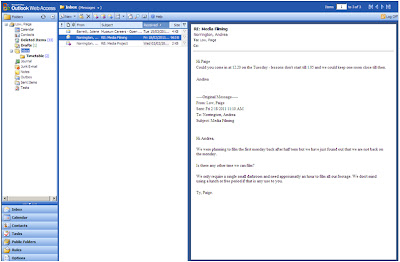 Screen Caps of the emails sent by me to Andrea (head of photography) to obtain a darkroom as our filming location.
Posted by Long Road Thriller 2011 at 08:19 No comments:

Email ThisBlogThis!Share to TwitterShare to FacebookShare to Pinterest
Labels: Paige

Today we edited the rough cut according to the feedback we got last friday.

*shortened the music with appropriate fading.
*made the titles shorter and layed them over the shots to shorten the piece and to make it look better.
*we've started adding graphics and movement to the titles to stop them feeling so static.
*we've also cut the second writing scene and instead made a montage of shots to substitute so that the pace of the piece isn't lost.
Posted by Long Road Thriller 2011 at 03:25 No comments: